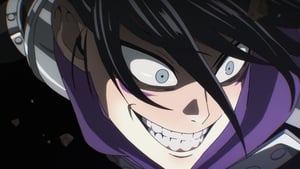 A group of battlesuit-clad terrorists called “The Paradisers” appears in City F, led by an enormous man known as Hammerhead. Calling for the redistribution of wealth, the group targets the fat-cat Zeniru, who in turn dispatches his bodyguard to defeat them. Unfortunately, Saitama is on the same errand.